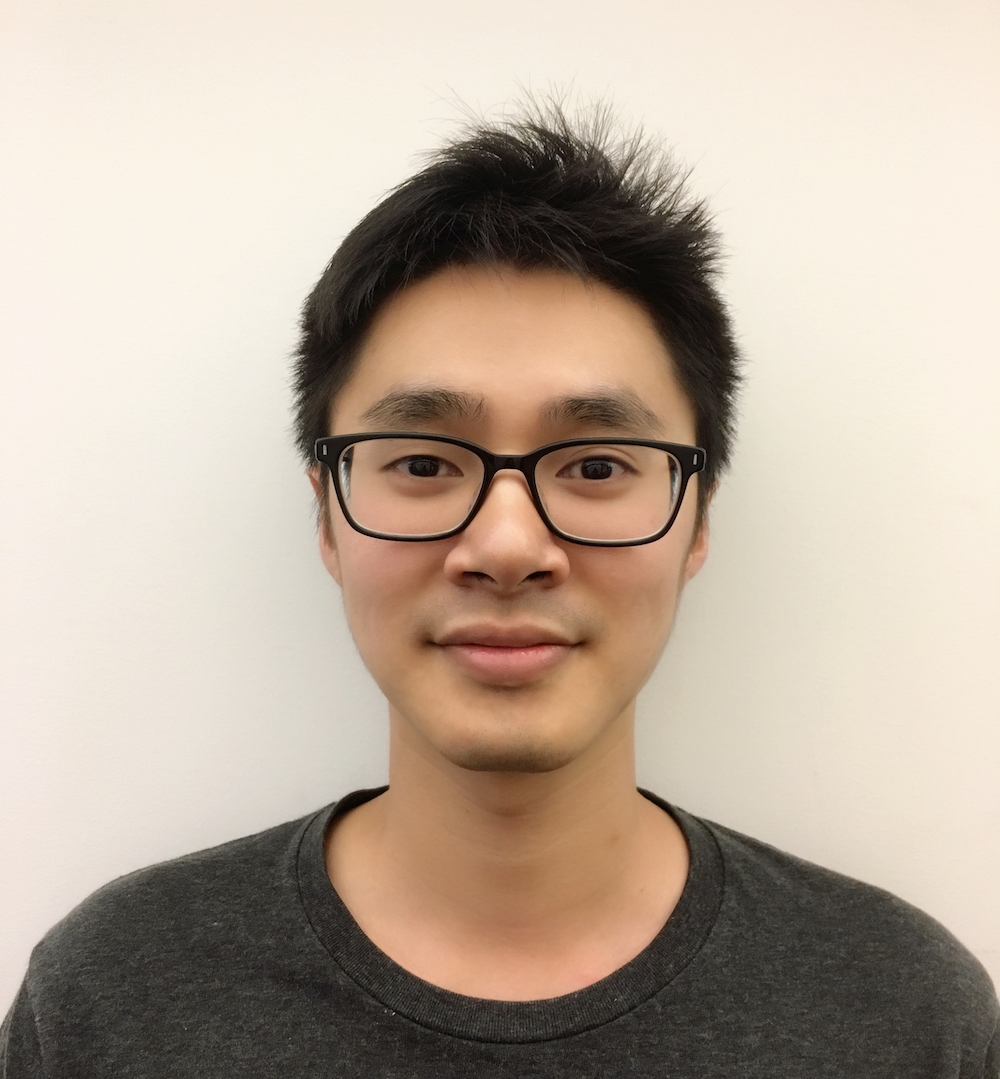 I am a computer scientist with an architectural design background. My research is focused on Community-Empowered Artificial Intelligence (AI), where I co-design, implement, deploy, and evaluate interactive AI systems that empower communities, especially in addressing environmental and social issues. In other words, I am a software infrastructure architect who builds interactive systems to support citizen empowerment.

Traditionally, scientists lead research to engage citizens in tackling environmental and social issues (e.g., air pollution) on a large scale. I have proposed an alternative, Community Citizen Science (CCS), to extend this science-oriented method to a hyper-local scale. CCS aims to empower communities and scientists to produce scientific knowledge, represent their voices, address local concerns, and shape more equitable power relationships. In this way, CCS advances the current science-oriented method by emphasizing continued community engagement after technology interventions. In my research, I apply crowdsourcing and data visualization to engage communities in providing and exploring data. Also, I utilize machine learning, computer vision, and data science to assist communities in extracting and explaining patterns in multiple types of large-scale data. For more details, please refer to my CV, research statement, teaching statement, and diversity statement. For people who speak Mandarin Chinese, if you are interested in the CCS concept, here is the video recording of my previous talk (in Mandarin Chinese) in the National Tsing Hua University in Taiwan on early 2021. Also, here is another video recording of a talk (in English) that I gave to the air quality working group at the European Citizen Science Association on late 2021.

I am an Assistant Professor at the Informatics Institute, University of Amsterdam. Formerly, I was a Postdoctoral Researcher at the Department of Sustainable Design Engineering, Faculty of Industrial Design Engineering, TU Delft, the Netherlands. Before TU Delft, I was a Project Scientist in the CREATE Lab at Carnegie Mellon University (CMU), USA. I received my Ph.D. degree in Robotics in 2018 from the Robotics Institute at CMU, where I conducted research on using technology to empower local citizens and communities. Previously, I received my Master's degree in tangible interaction design in 2012 from the School of Architecture at CMU, where I studied and built prototypes of interactive robots and wearable devices. Before CMU, I earned my dual Bachelor's degree in both architecture and computer science in 2010 at National Cheng Kung University, Taiwan.

About my name, my given name is Yen-Chia, not Yen. My English name (Yen-Chia Hsu) comes from the Wade-Giles transcription of my name in Traditional Mandarin Chinese. In Taiwan, when using the Wade-Giles transcription system, we put a dash between our given name's characters. Also, in Traditional Mandarin Chinese, we put the family name before the given name, which is different from the English naming conventions. For pronunciation, Yen is like the Japanese yen, and Chia is like "ja" when saying Ninja. My family name (Hsu) is hard to pronounce since the English system does not have such types of vocalization. The closest sound is "she," not "su."

Other Media and Book Coverage 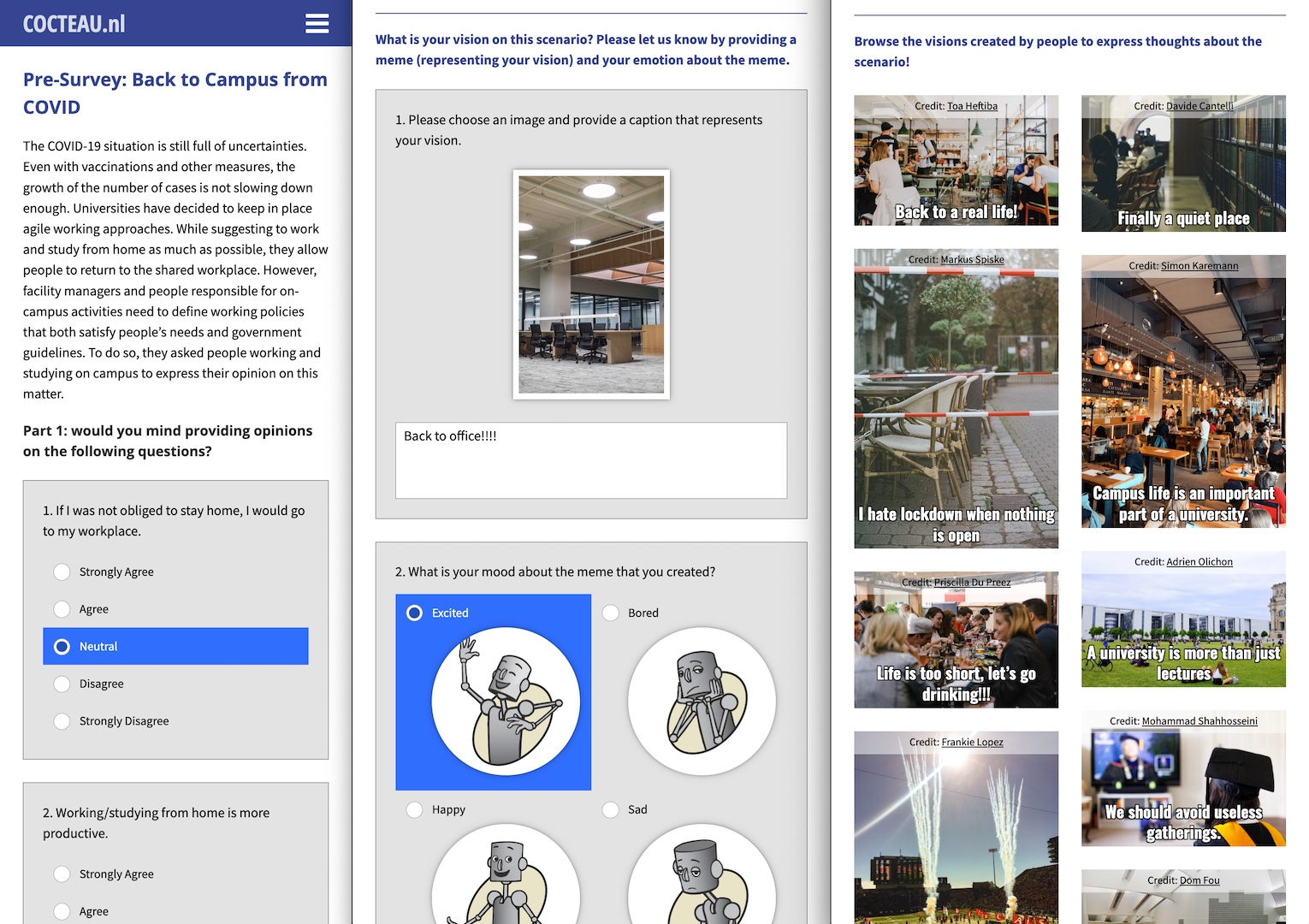 COCTEAU: an Empathy-Based Tool for Decision-Making [P5, P6, T14], 2021 - 2022
I worked in a team to build a tool to strengthen interactions between citizens and decision-makers on a large scale. The goal is to elicit empathetic relations among stakeholders to collect perspectives on societal issues. (website link) 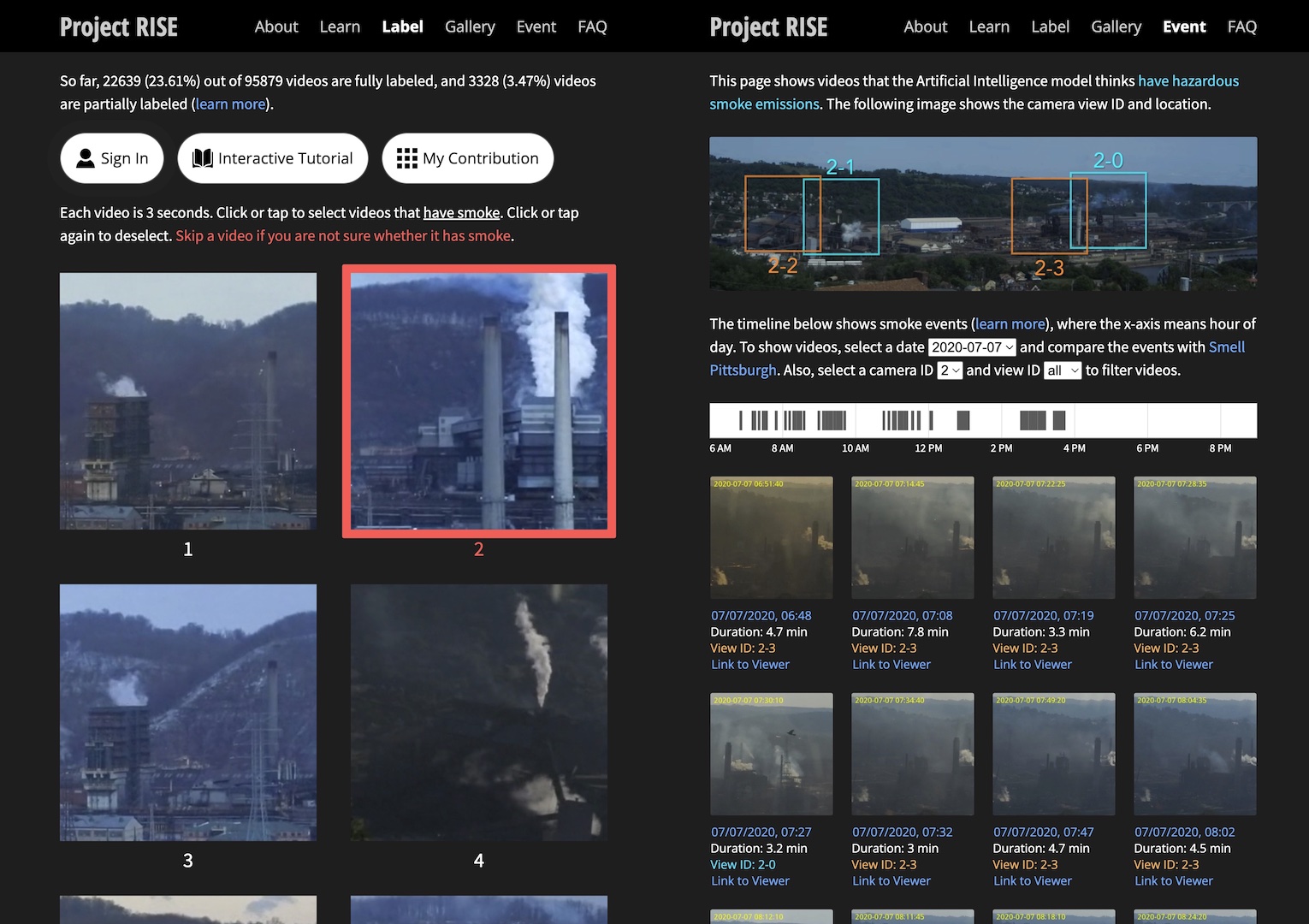 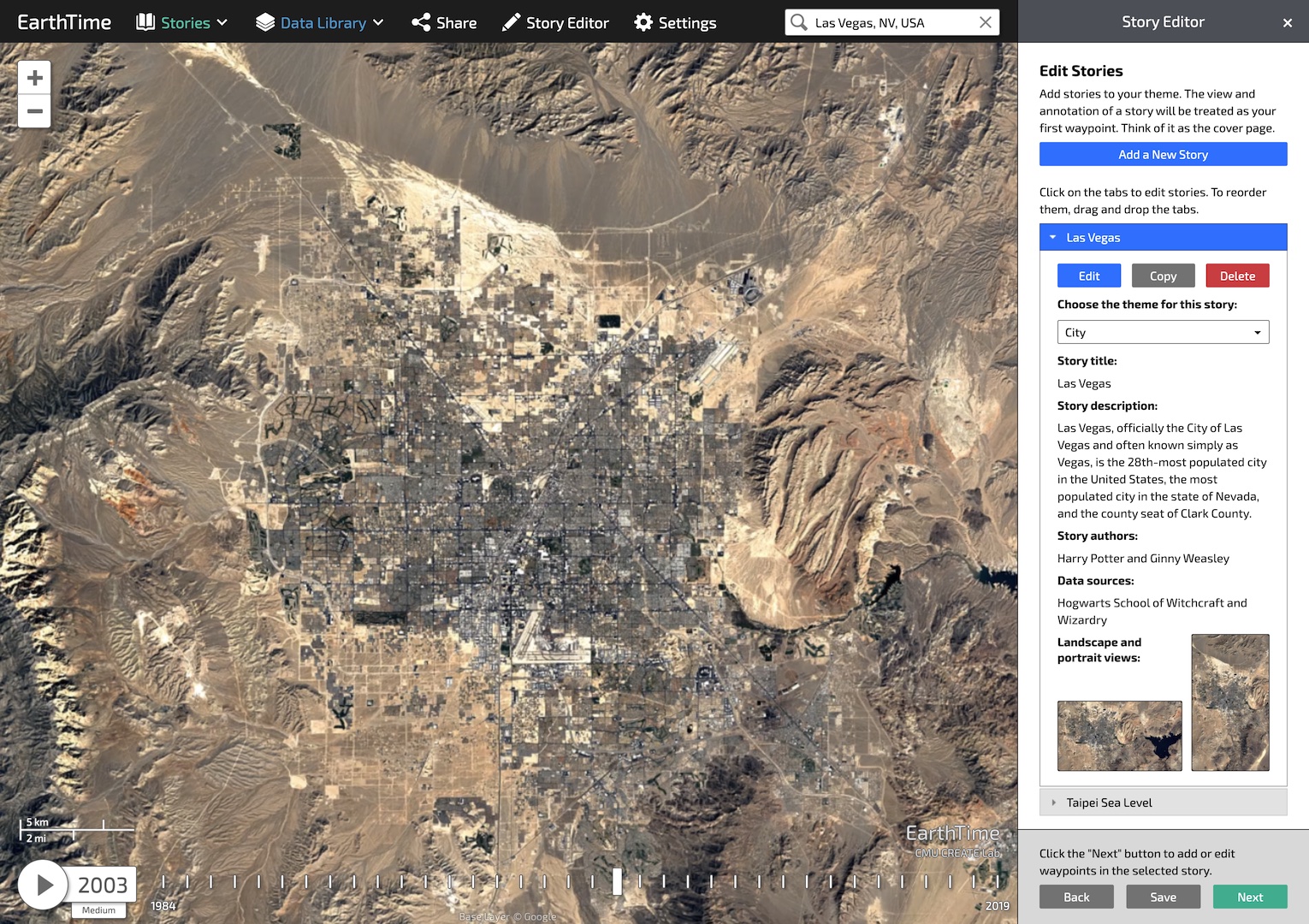 A Tool for Creating Interactive Stories on the EarthTime Timelapse [T10], 2018
I worked in a team to develop a web-based tool that enables users to create, edit, and share stories about nature changes and human impact on EarthTime, visualizing the transformation of the EarthTime over three decades with images and datasets. (website link) 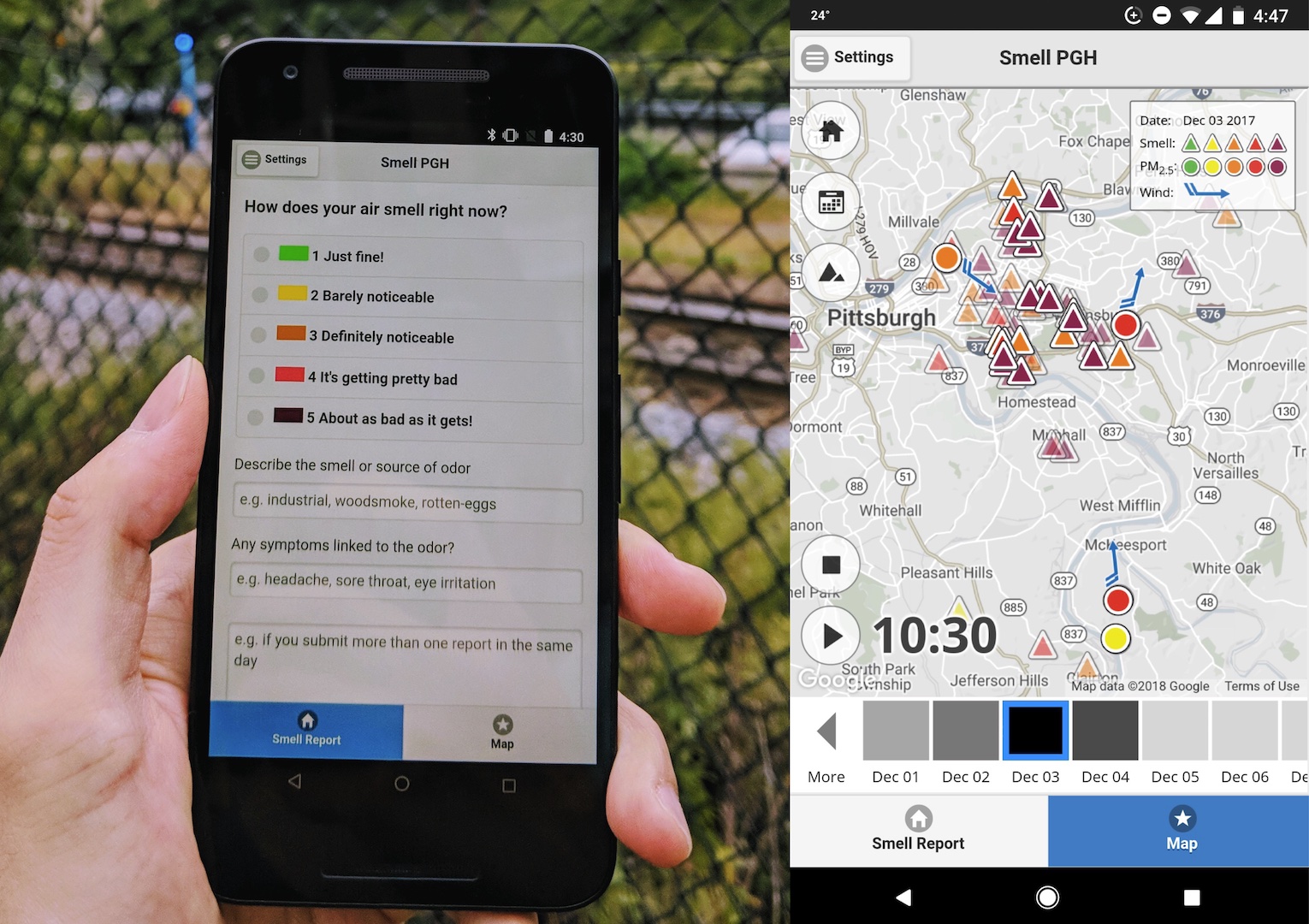 Visualization Tool for Environmental Sensing and Public Health Data [P2, T5, T8], 2017
I worked in a team to develop the Environmental Health Channel, an interactive web-based tool for visualizing health symptoms, particulate measurements, and personal stories from residents who are affected by oil and gas drilling development. (website link) 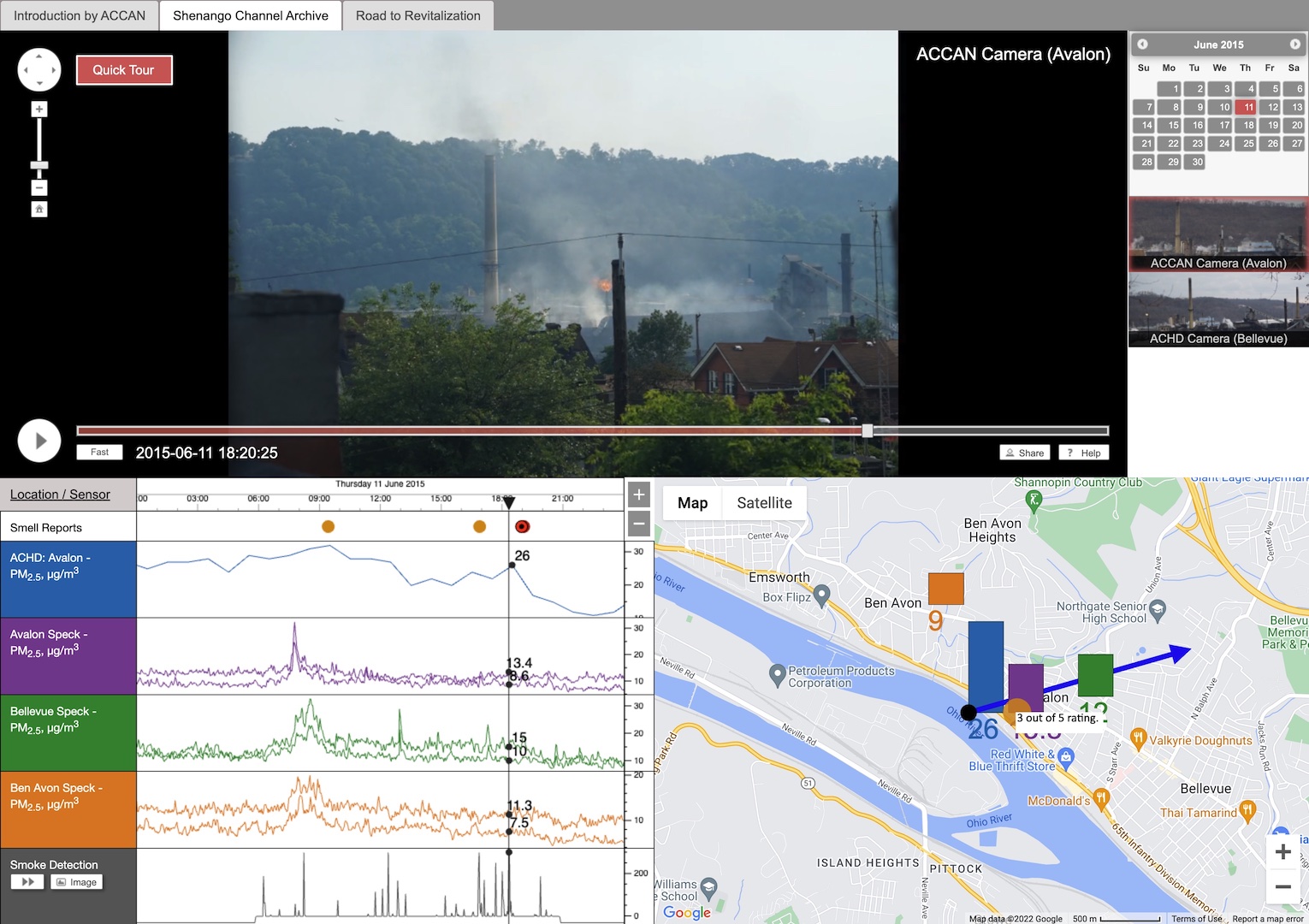 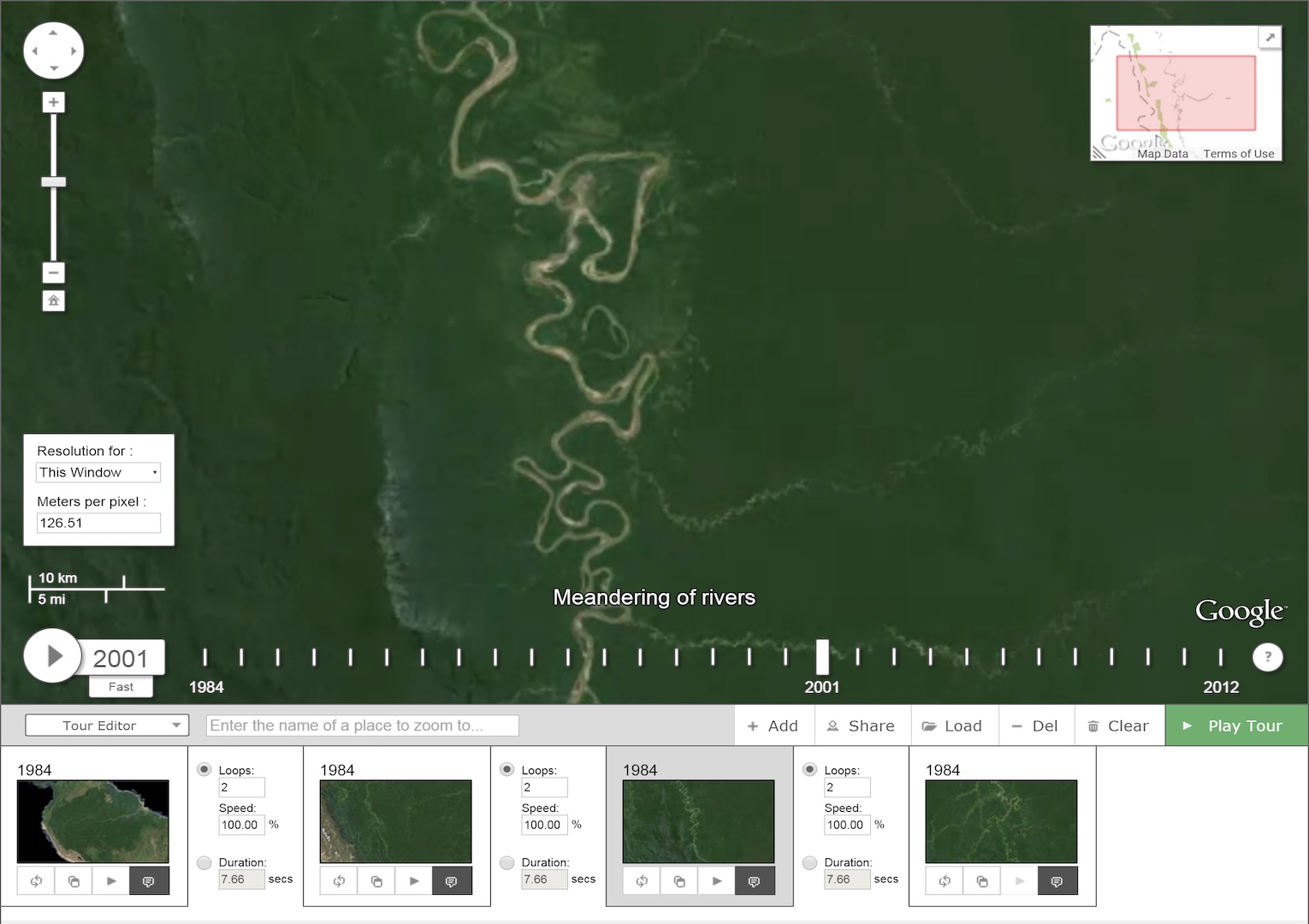 A Web-based Large-scale Timelapse Editor for Interactive Storytelling [P1, T7], 2014
Based on the timelapse viewer, I developed a tool for users to create interactive slideshows or guided tours. Users can embed or share the slideshows or tours on social media for telling interactive stories. (website link) 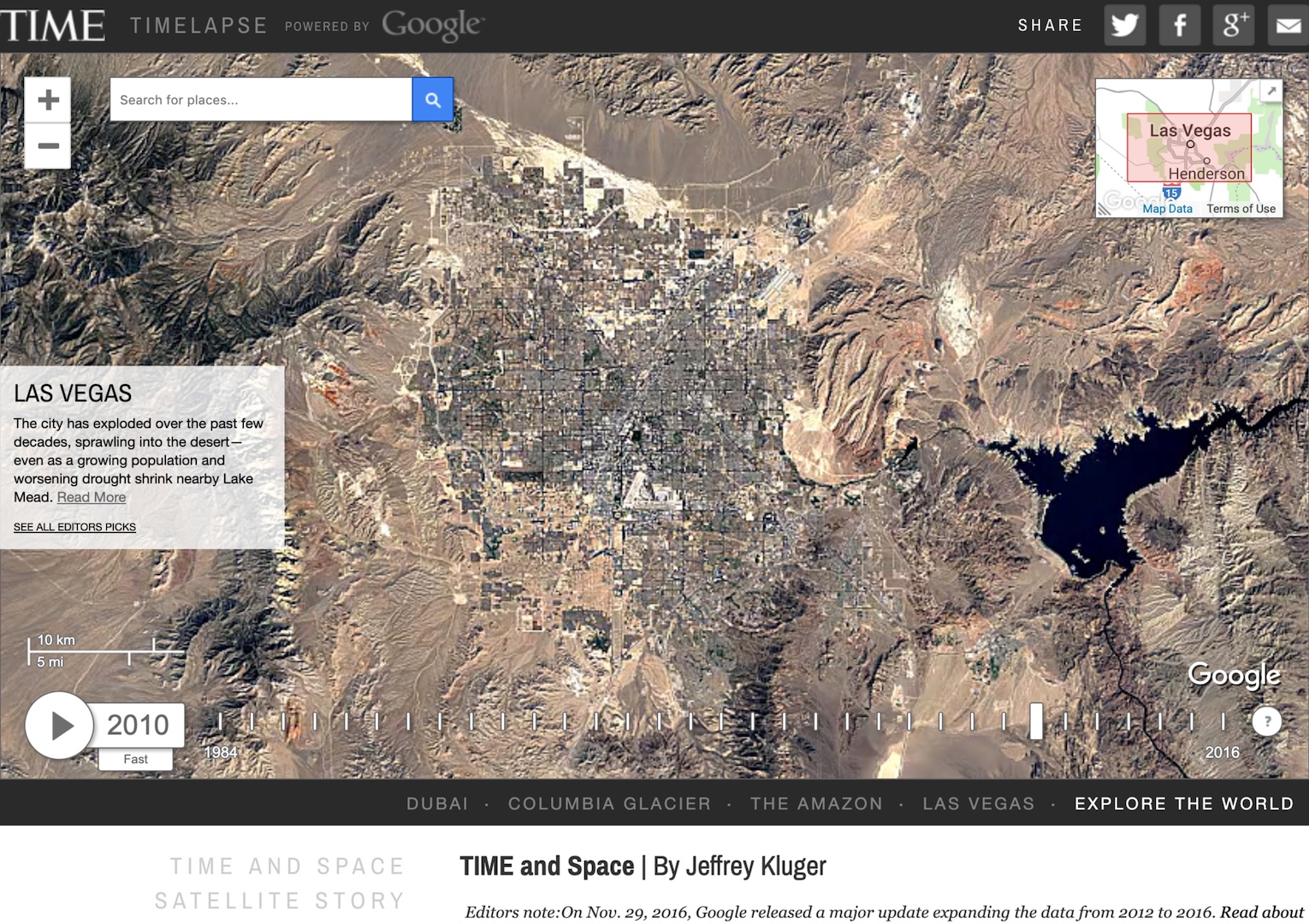 Earth Timelaspe Viewer Visualizing Landsat Satellite Imagery [F1, T7, A4], 2013
I worked in a team to develop an Earth timelapse viewer, consisting of cloud-free mosaics of the planet with billions of pixels for decades. The interactive viewer was released with Google and TIME. (link to Google Earth Engine, link to TIME) 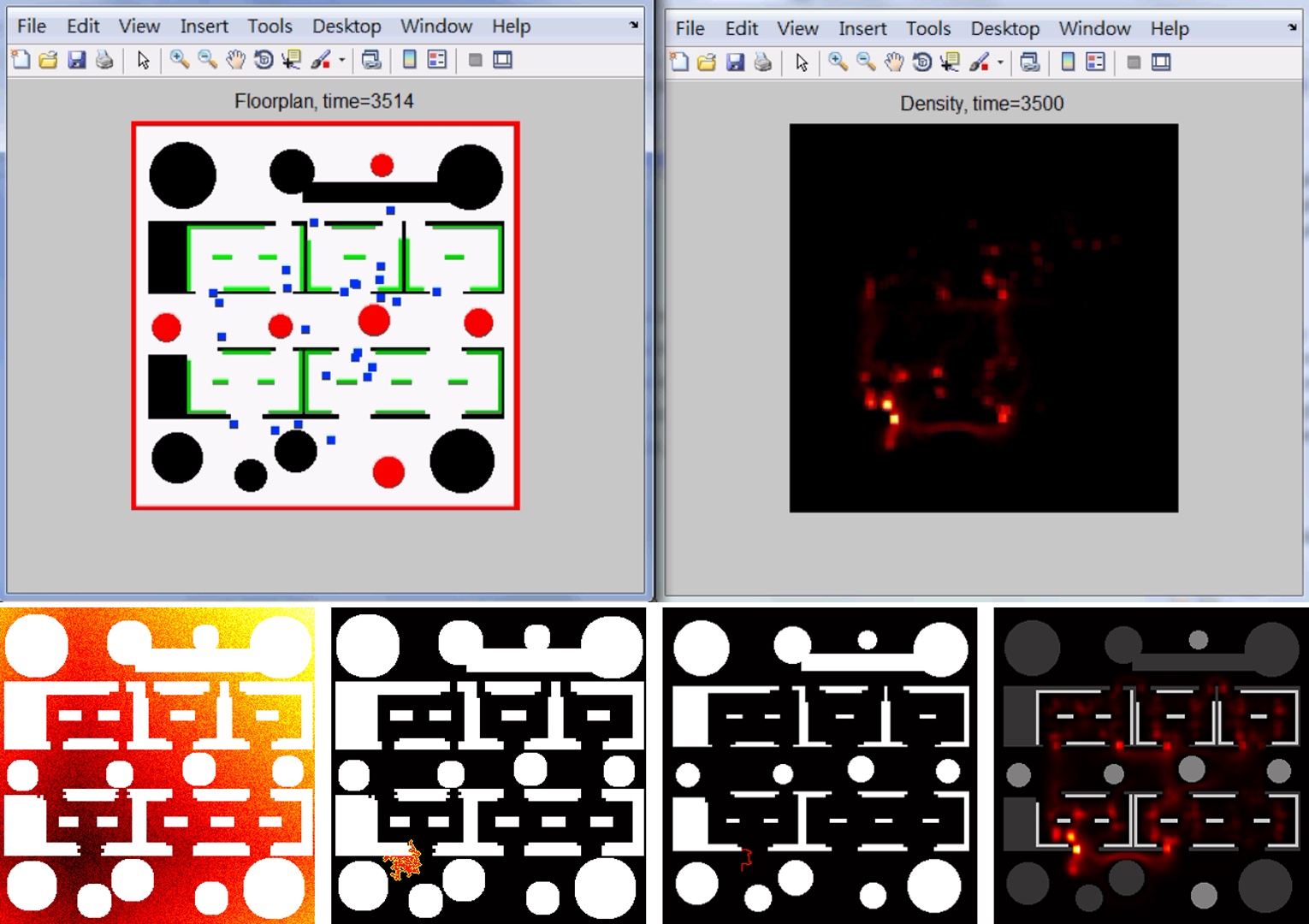 SimArch: A Multi-Agent System for Human Path Simulation [O2, T2], 2012
SimArch uses Markov Decision Process to build a behavior model. The model simulates mental states, target range detection, and collision prediction when agents behave in a museum. SimArch outputs the prediction of how likely a person will occur in a location after simulation. 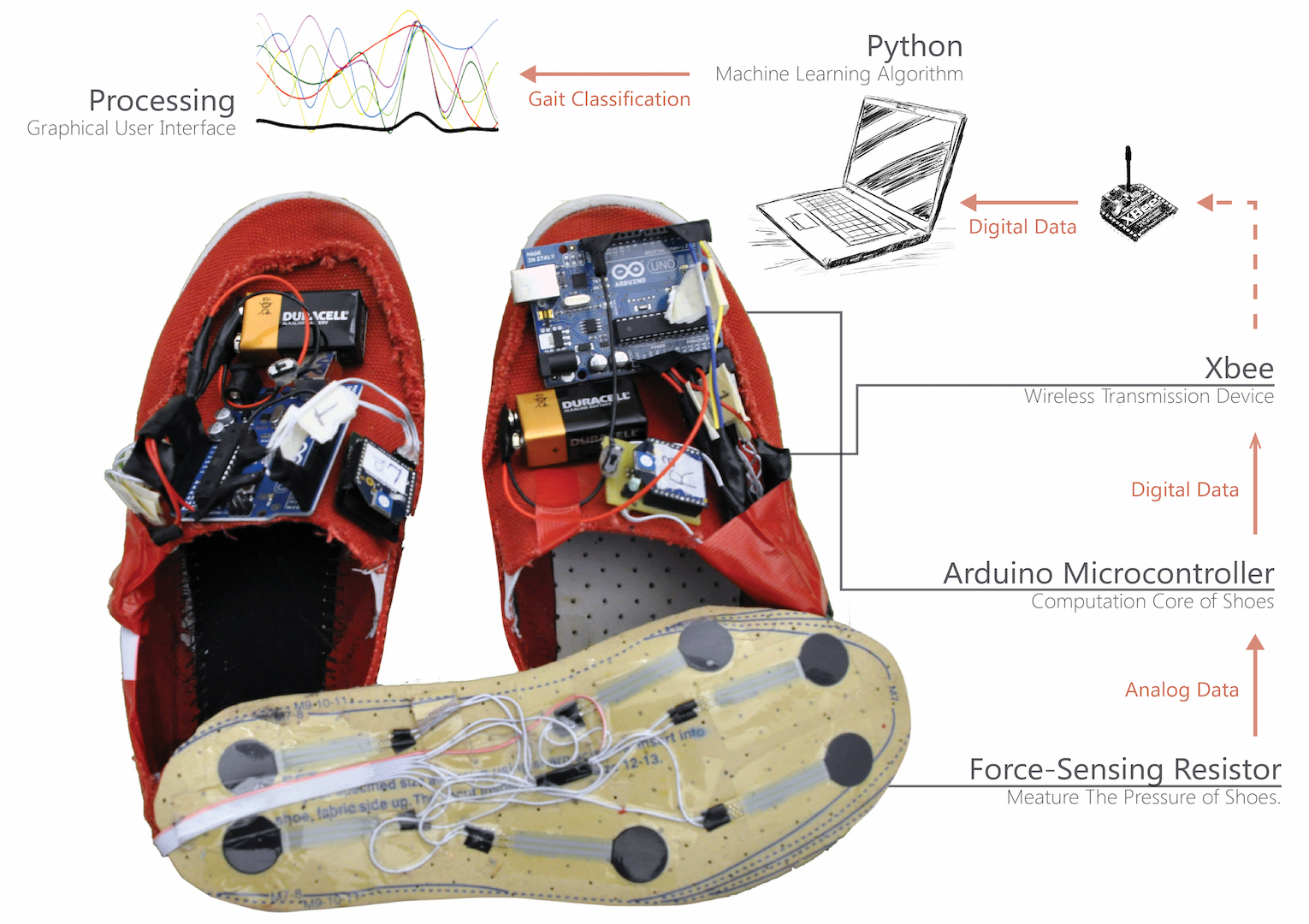 SENSEable Shoes: Hands-Free and Eyes-Free Mobile Interaction [T3], 2012
SENSEable Shoes is a platform for interaction designers to create applications. It recognizes low-level activities by measuring the weight distribution over the feet with sensors in the shoe pad. A Support Vector Machine classifier identifies mobile activities and foot gestures. 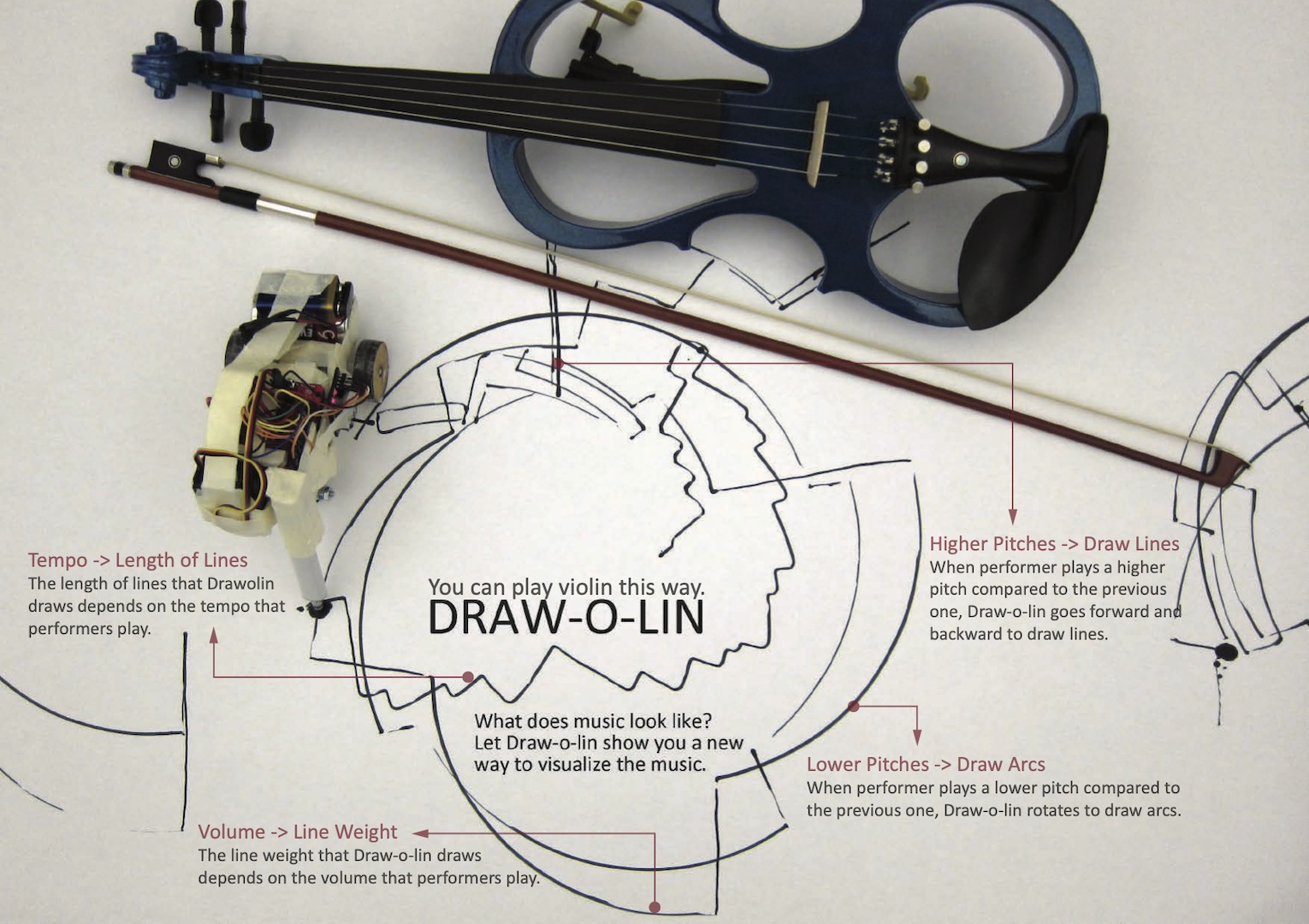 Draw-o-lin: A Music Visualizer for Violin, 2011
What does music look like? Draw-o-lin is an interactive mobile robot visualizing music by drawing graphs on a paper according to various sound properties. Violin performers control the robot by playing various pitches, alternating the volume, and changing the tempo. 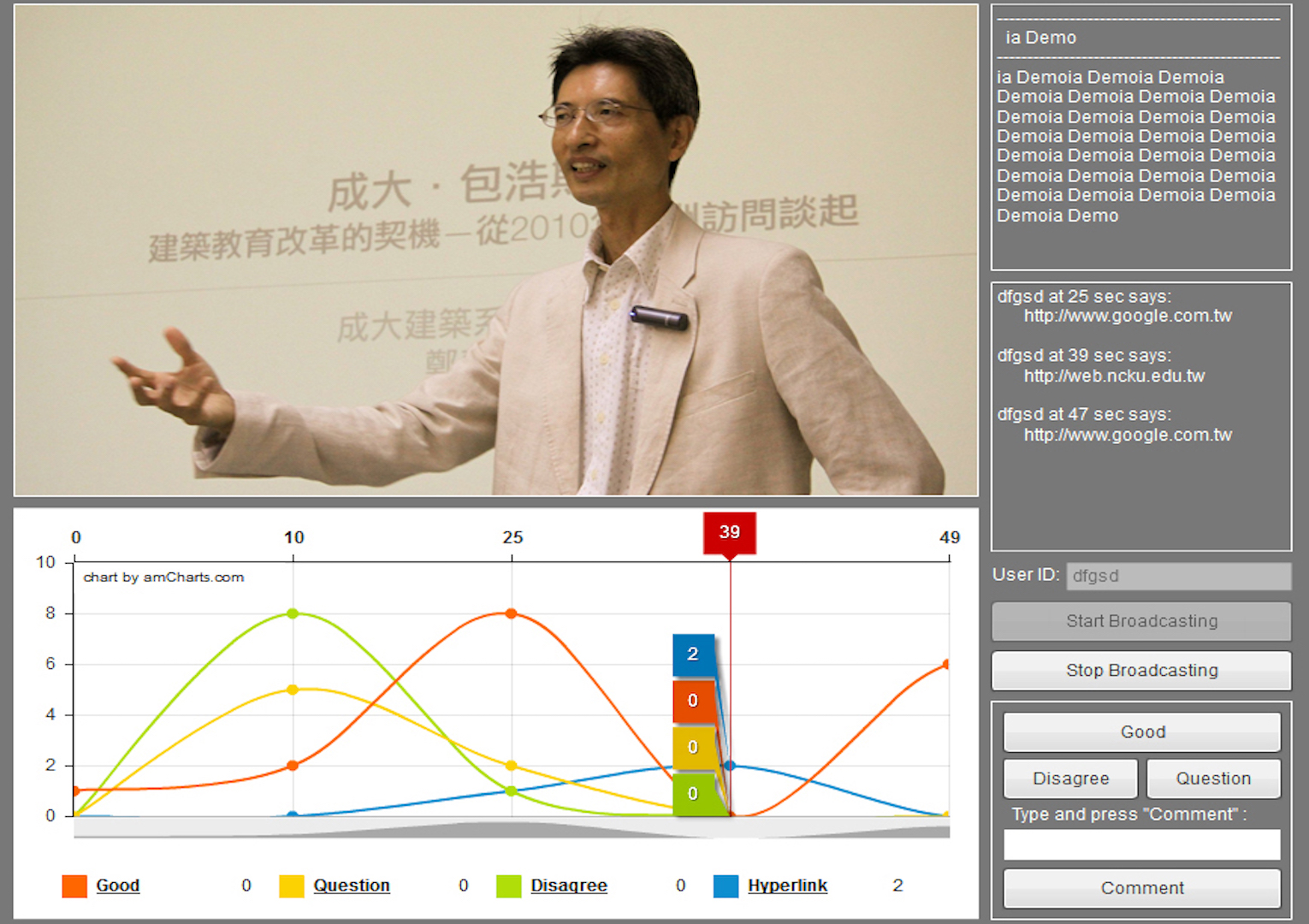 SynTag: A Web-Based Platform for Labeling Real-time Video [C2, C1, T1], 2010
Users can label Good, Question, and Disagree tags in real or non-real time with visualization of time-stamp video previews on an interactive timeline. SynTag creates thumbnails by using real-time tags for presenters to receive instant feedback and for others to retrieve videos.